Interview with Van de Haar Groep about the RECO eTrac 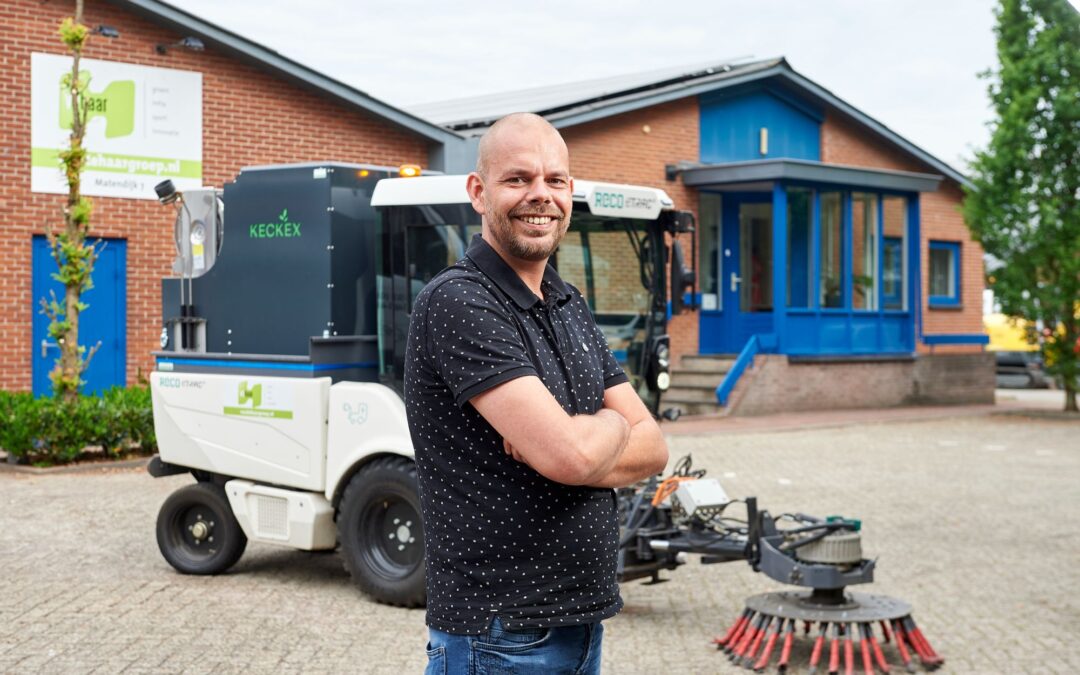 More and more Dutch companies and municipalities are now working with the RECO eTrac electric tool carrier. Who are they, what are they doing to reduce their CO2 emissions, and why did they choose the RECO eTrac? We asked the companies themselves. This time, we talk to Michael Eshuis and Peter van de Haar, respectively work planner and director at the Van de Haar Group.

Van de Haar Group has been active in green, infra and sports for almost 75 years. This contracting firm from Wekerom employs more than 80 professionals in the construction, repair and maintenance of outdoor areas on a daily basis. Director Peter van de Haar: “We work mainly for municipal authorities and larger institutions, so often on the basis of precise specifications. With our long trading history, we naturally have a lot of experience. But in addition to our craftsmanship, we also distinguish ourselves by continuously innovating. We do this by adapting the machines we use to do things better, by devising smarter working methods or by coming up with solutions for our clients. For example, we are also the founders of the WAVE [hot water machine – ed.], although we have not been machine builders for some years now, and now focus entirely on realising and managing outdoor spaces.”

With level 5, Van de Haar Group is on the highest step of the CO2 performance ladder. Sustainability is therefore paramount across the company. Van de Haar: “We try to have everything as sustainable as possible, as long as it’s realistic, workable and affordable. This can be a difficult balance to strike, because not everything is available or fully developed yet. On the other hand, this also encourages us to pioneer. We would like to have something electric in every segment so that our people can get used to it. When we switch from traditional machines to electric ones, our people initially have some resistance; they have to learn how to use it. We have noticed this before with the switch to electric cars and other equipment. The joke is, once people take the step, they fall completely in love with it and never want to do anything else. Work planner Michael Eshuis: “It takes some getting used to, whether it’s an electric car or another electric vehicle; you no longer have any vibrations, no more noise from the engine, no more fuel smell. Almost everyone has some resistance at first, but once you get used to it, you don’t want to go back.”

Early this year, Van de Haar Group took a new step in the electrification of the equipment with the introduction of the RECO eTrac, delivered by Machinehandel Bruntink in Voorst. Van de Haar: “It is a special purchase for us. Normally, our purchasers handle this, but in this case I involved myself, I like it! We do a lot of integral specifications; complete district maintenance for municipalities. So you need a good and reliable brush machine within your work package in order to have operational reliability. When our previous brush machine was no longer usable, we were faced with the choice, what are we going to do with it, are we going to lease it, or are we going to buy a new machine ourselves? In the end, we decided to buy the RECO eTrac. A real positive step. A machine of this size has to run continuously to be economically viable and that’s not yet the case. Yet we committed to it, because with the RECO eTrac, we have a durable, stable and strong machine that we can learn with. At the same time, we continue investigating what else we can develop to attach to the machine.”

At the moment, the RECO eTrac is being used to fight weeds on pavements in the municipalities of Utrecht and Arnhem and on the substations of electricity company Qirion. This electric machine also requires some getting used to by employees. Eshuis: “We have different users at different locations on the tool carrier, so they all need to know how the machine differs from the tool carriers they were used to. For example, you can leave a traditional machine running on 10% fuel for a month, so to speak, and it will still be running on 10%. But an electric machine must be recharged after a day’s work otherwise it will be empty the next day. A regular driver will makes this mistake once at the start, and but then never again. Because he teaches himself to put the machine away at the end of the day and will automatically plug it in. And then there’s nothing wrong. Van de Haar: “This is the reason we would like to have something electric running in every part of our company, so we all get used to it and go with the flow.”

The drivers at Qirion, the municipality of Utrecht and the municipality of Arnhem have all now worked with the RECO eTrac. Van de Haar: “We are still at the beginning of the season but are very satisfied at the moment. It is a fine machine that does what it needs to do and we see that it can work eight hours a day. Because it is one of the first in its new segment, some attachments are still being developed. This sometimes causes us problems because we would also like to use the RECO eTrac in other areas than and not just as a brush machine. But that is part of pioneering.”
Eshuis, “We like that, we are pretty much set up to work like that ourselves.” Van de Haar: “Of course this is not the only reason, we are not a philanthropic institution. Ultimately, it has to be economically viable. But we know that with this electric tool carrier we are now ready for the next step.”